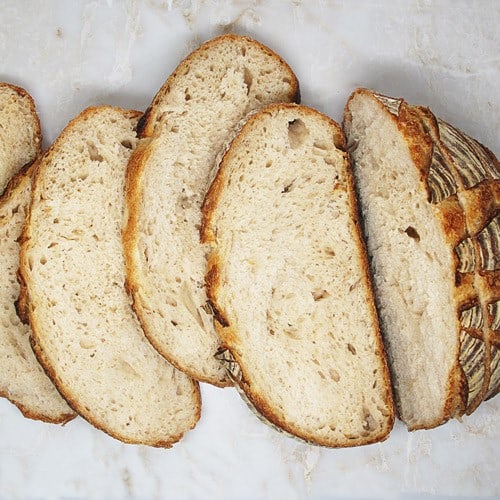 This second part in our Sourdough Series takes our Country Sourdough Recipe and uses the concepts covered in part one to push that bread in two very different directions. We created a “less sour” loaf with mild, yet complex flavours and an acidity that stayed in the background, as well as a “more sour” loaf that was not only quite tangy but also packed with whole grain flavour.

We applied a slightly different approach to each stage of the bread making process. The loaves detailed below have been pushed fairly close to the limit of what can be accomplished without running into problems with structure or undesirable microbes.

In order to ensure the ongoing health and balance of both yeast and LAB (lactobacilli – acid producers) populations in the seed culture, we kept changes modest: cooler temps, white flour and peak maturity for our “less sour” loaf, versus warmer temps, a little acid-friendly rye flour and a more ripe maturity for the “more sour” bread.

We fed our starter twice leading up to the mixing of the Levain, but even after just one feed under these conditions we noticed a difference in the stronger, more acidic aroma of the “more sour” culture. If there is too little acid in the ongoing culture, undesirable microbes (such as leuconostoc or mould) can multiply and infect the culture. If there is too much acid and an overripe culture, yeast populations are compromised and enzyme activity may get out of hand. To avoid this in our “more sour” loaf, we limited the proportion of whole rye flour to 20% and were careful not to go too far when allowing the culture to mature to a more ripe state.

Levain – Get Ready to Encounter Salt

For the “less sour” loaf, using a small levain not only limits the amount of acid in the loaf, but also slows down fermentation. Slower fermentation allows enzymes in the flour to break down starch into sugar, further limiting the perception of a sour taste.

In addition to getting ready for the addition of salt, we have also incorporated similar maturity, temperature and flour choices as in the Mother culture. For the less sour version, we use the levain a little earlier in its cycle than we could for the Mother culture — when it is well-risen but has not yet reached its peak. This type of small, less ripe levain has been popularised by Chad Robertson and Ken Forkish in their bread books.

Many bakers’ normal practice is to take part of the levain and use that to perpetuate the ongoing culture. The best way to do that with a small, young levain is to take the portion needed to mix the main dough, then leave the remainder to continue to ripen to full maturity before using it to perpetuate the culture.

Main Dough — Ripeness is the key to controlling the aroma

In considering how much whole grain to put in the overall formula for these breads, we increased the whole grain in the “more sour” loaf from 15% of the total flour up to 20%; for the less sour version, we not only reduced the proportion of non-white flour to 10%, but also switched from whole grain to high-extraction flour and omitted the acid-friendly rye altogether. High-extraction flour can be made easily at home by passing whole wheat flour through a fine strainer to remove the larger bran flakes. As Debra Wink points out, the bran in whole grains buffers acidity and allows the acid producers (LAB) to produce more acid in a more ripe culture. And rye flour produces sugars in the dough that feed the LAB that produce acetic acid, which is more flavourful and noticeable than the other main sourdough acid, lactic acid.

Since the larger levain of the “more sour” loaf carries more enzymes (that degrade protein) into the main dough, we used higher-protein bread flour (instead of AP) for the white flour portion of the loaf and added one extra fold to the bulk fermentation to help ensure good structure.

Ready to begin your own exploration of sourdough acidity? We have generally found that the most effective factors for controlling acidity in sourdough are 1) maturity (the degree of ripeness), 2) the choice of temperature (warmer for more acid, cooler for less), and 3) the choice of flours (whiter for less acid, more whole grain, particularly rye, for acidity). The key to making changes is to keep them modest and use only one or two at a time, then assess how they affect other aspects of the dough before deciding which to jettison and which to embrace. Enjoy!