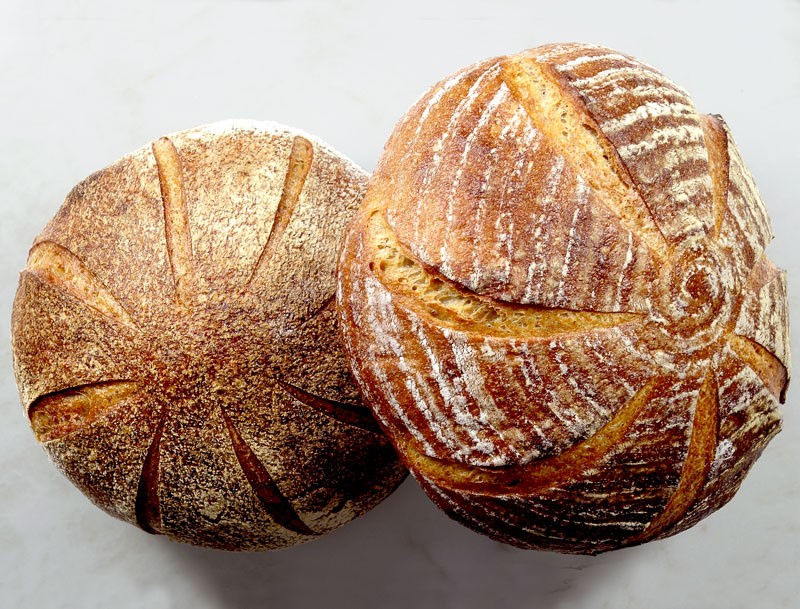 Whether you’re looking for a mild sourdough to pair with butter or a tangy, full-flavoured bread that will stand up to a rich soup or strong cheese, these are the tweaks that can help you achieve your ideal sourdough.

We recently had the good fortune to attend a class at King Arthur Flour on the science of sourdough. The class, taught by microbiologist Debra Wink, focused on all the different tools the baker has to control the natural sourdough fermentation process. While Debra waxed poetic about six-carbon chains and weak hydrogen bonds, KAF pro baker Amber put us through our paces with two of King Arthur’s iconic sourdoughs: the mild and delicate Pain au Levain and the tangy Vermont Sourdough.

What we brought away from the class was a deeper understanding of the science behind some of our favourite sourdough tweaks. Below, we survey three key factors for influencing acidity in sourdoughs: temperature, flour choice and maturity. There are other factors as well, but these are the ones we find to be both easy to implement and highly effective.

Temperature. Temperature is the one variable that bakers can control at every stage of the bread making process, from Mother culture through the final shaped proof. It’s an easy variable to manage using water temperature and a Proofer.

Whole Grain and Rye Flours. Whole grain and rye flours provide minerals and enzymes that can influence acid production in sourdoughs. The higher mineral content of whole grains acts as a buffer in the dough so that more acid can be produced during extended fermentation. And the complex carbohydrate and enzyme content of rye flour helps produce unique sugars that tip the balance of acids in favour of acetic acid, which has more aroma and flavour and is more noticeable in the dough than lactic acid.

Maturity. In our experience, tweaking maturity is a highly effective way to control sourdough flavour. This applies to refreshing the Mother culture, fermenting the pre-ferment and rising the main dough (bulk fermentation). It does not apply to the final proof, because the point at which the shaped loaf is ready to bake should only be determined by the balance between gas production and structure. As Ms. Wink taught in her class, the reason maturity is so effective is that the acid producers (LAB) have a faster growth rate than yeast, so harvesting the culture when it is more ripe quickly shifts the population balance towards greater numbers of LAB.

In part two of this series, we use these factors to play with our tried-and-true Country Sourdough Recipe.