This easy overnight method is our favourite no-fuss way to make pizza. The accurate temperature control of the Proofer helps ensure dinner is ready on time.

Our rustic pizza dough develops wonderful rich flavours by fermenting at a range of temperatures, from an overnight in the fridge through a slow, warm rise in the Proofer. It is a pleasure to handle and forms a nicely raised rim with a crisp crust and open crumb. The addition of a small amount of whole wheat flour adds a subtle, clean wheat flavour and helps tenderise the crumb, but doesn’t cause the crust to be dense, bitter or mealy. The crust is so delicious it is addictive, even without toppings.

Mix the dough the night before baking, then divide and rise the dough the next day after lunch. Because the Proofer helps produce a predictable rise, this recipe includes a timetable that takes the guesswork out of rising dough and timing a meal. Scroll down, and there’s a “Quick Crust” variation at the end for times when mixing the dough ahead of time isn’t possible.

Mix ingredients. Before measuring the water, add ice and chill. (Cold water slows yeast activity so enzymes have time to work, and also causes some of the yeast to release glutathione, which makes the dough easier to stretch.) Measure or weigh the dry ingredients into a bowl and whisk or stir until well combined. Measure or weigh the chilled water, add to dry mixture and mix just until all the flour is moistened. Cover and place in the refrigerator for 20 minutes to hydrate the flour and begin chilling the dough.

Stretch and Fold. Lightly oil a clean bowl, your hands, and a work surface with olive oil. Turn the dough out onto the work surface and stretch it into a rectangle. Fold the rectangle like a business letter, then rotate the dough and stretch and fold again, so that all four sides of the dough have been folded to the center. Do this a second time, stretching the dough and folding all four sides to the center. The dough should feel noticeably firmer and smoother.

Retard dough. Place the dough in the oiled bowl and turn it over so that it is lightly coated with oil. Cover and chill in the refrigerator for at least six, or up to 30 hours.

Choose a timetable. From the chart below, choose a fermentation temperature and its corresponding time to remove the dough from the refrigerator. For example, if you would like to bake the pizzas at 6pm, then setting the proofer to 75F would mean taking the dough out of the refrigerator 4.5 hours ahead of baking, at about 1:30pm.

Pre-shape the pizzas. Set up the Proofer with water in the tray and the rack in place. Set the thermostat to the temperature in the table, below, that corresponds to the time you would like to like to remove the dough from the refrigerator.

Remove the dough from the refrigerator, scrape it out onto a lightly oiled surface and cut it into two pieces with a sharp knife.  Shape each piece into a ball by drawing all the edges up, then pinching seams gently to close. Place the dough balls seam side down on a 9 x 13″ (23 x 33 cm) pan or put each ball into a bowl.

Proof the pre-shaped crusts. Set the container(s) with the dough balls in the Proofer and allow the dough to relax and ferment until about doubled in size. A gentle poke with your finger should produce an indent that fills in slowly. Approximate proofing times are listed in the table, below.

Preheat the oven. One hour before baking, place a pizza stone in the middle of the oven and preheat to 260 ºC. The goal is for the underside of the crust to be crisp and browned at the same time that the topping ingredients are cooked. If the pizzas are done on top but not browned enough underneath, next time move the stone to a lower position. And if they are getting too dark on the bottom before the tops are finished, move the stone to a higher rack.

Shape the crusts. Sprinkle semolina (or flour) over a 12-inch round piece of parchment, leaving the outer portion of the circle bare. (Baking on parchment helps keep the oven free of burnt semolina and dripped toppings.)

Keep the crust not being working on covered. Place a dough ball seam side down in the semolina, and with oiled fingertips tap the dough down to form a disc. Gently stretch the dough into shape, leaving a thicker rim at the edge and focusing on stretching rather than pressing down. This can be done either by stretching with oiled fingers from the top of the dough, or by sliding the underside of the dough over the backs of floured hands and stretching gently from side to side. When finished, cover the shaped crust and move to the other pizza.

Top and bake the pizzas. If desired, cover the crusts and allow to proof for 30 minutes in order to create the most open crumb possible in the border of the pizzas (this is optional, but is built into the timetable). Add toppings and bake on the pizza stone for 7-10 minutes, using a peel or the back of a sheet pan to transfer the pizzas to the oven. About half way through the baking, rotate the pizzas to promote even browning and slide out the parchment so the pizza finishes baking directly on the stone.

This method creates a warmer dough that is ready to bake in just two hours. The flavour is still good, though not as rich and fully developed as the mix-ahead version. With flavourful toppings the pizzas are delicious.

Use the same ingredients and procedure as above, except warm the water to lukewarm (about 38 ºC), autolyse at room temperature for only ten minutes, and omit the refrigerator time. Directly after stretching and folding the dough, divide it in half, round into balls and transfer to a pan or bowls. Proof the pre-shaped crusts at 30 ºC for about one hour and ten minutes, then shape and bake. If the optional 30 minute rise after the crust is stretched to its final shape is omitted, the pizzas can be ready to bake about two hours after mixing the dough. 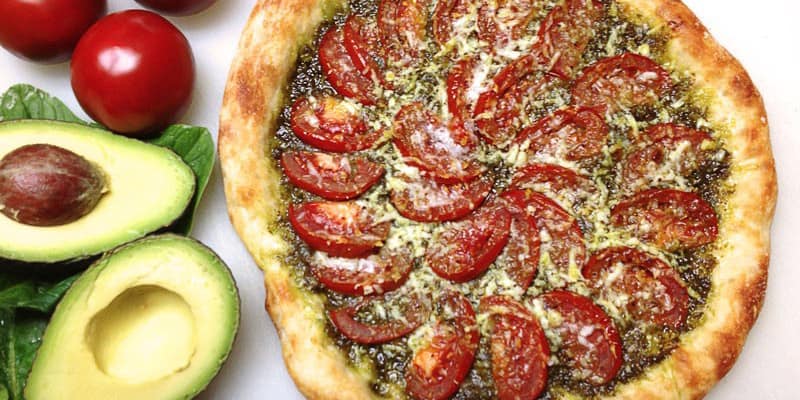