No-Knead bread is justifiably popular due to its ease and good results. In side-by-side tests, we discovered that 90 seconds of extra work, plus a few tweaks to the ingredients, takes no-knead bread from good to great.

We ran four side-by-side tests, holding each variable constant – water temperature, ingredient weights, equipment, and environment (each dough had its own Proofer to ensure consistent fermentation). The first factor we tested was giving one of the doughs three folds during the long first rise. Once the positive effect of folds on structure and flavour was established, we went on to test a version with a touch more salt and half the yeast, which further improved the flavour, then moved on to a final version with a little whole grain for even more full, round flavour.

Folding the dough during its long rise improves the dough’s structure dramatically. No longer a sticky, shaggy mess, it becomes smoother, easier to handle, and most importantly, better able to contain the gasses produced by fermentation. From the first fold through the final baked loaf, the folded dough was bouncy, higher rising and held its shape better than the unfolded bread.

During the dough’s long fermentation, better structure shows up as a smoother dough that rises quite a bit higher than the dough without folds. Despite being de-gassed three times during its long rise, the folded dough still finished with a higher rise. (see photo, below). 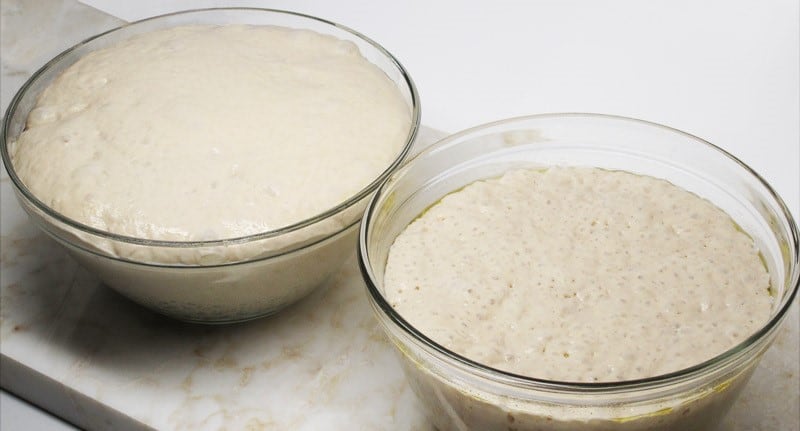 The folds create better structure in three ways. First, the action of stretching and folding the dough develops gluten strands. Second, the introduction of a little oxygen during the folds also helps boost structure as oxygen is necessary for gluten formation. Finally, the folds stimulate fermentation by encouraging the yeast to produce more gas, which stretches the dough further, developing more gluten. This improved structure made the dough easier to shape and allowed the final loaf to rise higher in the oven.

The folded dough (left) had a rounder shape and rose higher in the oven than traditional no-knead bread (right).

Our side-by-side tests also revealed that the folded no-knead bread had a rounder, more appealing flavour that struck a better balance between acid and sweet than the loaves without folds. Yeasts need both oxygen and a steady supply of food (sugars produced from the flour) to maintain a good balance between gas production and alcohol production. During a long fermentation, they exhaust all the oxygen around them and begin to produce mostly alcohol; likewise, once their local food supply is exhausted, they need to be moved to find more food. Folding the bread a few times during its long fermentation helps move the yeast to find more food and to introduce a little more oxygen into their environment.

While folding the dough produced a big improvement in structure, the biggest improvement in flavour came from cutting the yeast in half. Classic no-knead bread (made with ¼ tsp instant yeast and 2¾ cups of flour) often tastes flat and dull. That lack of flavour comes from the yeast outpacing enzymes and consuming too many of the available sugars in the dough. When we tested a loaf with half the yeast, we were amazed at the difference it made – the enzymes in the dough were able to keep up with the hungry yeast, leaving enough residual sugar to form a rich, flavourful bread.

We found that tasters unanimously preferred the versions of no-knead bread with slightly more salt, 1½ teaspoons instead of the original 1¼ tsp. There’s more to this than making the bread a touch saltier. Salt improves flavour in bread by altering the balance of flavours. It slows yeast activity, giving enzymes time to break down starches that contribute sweet notes to the bread’s flavour and improve browning. Increasing the salt helps balance the sour flavours created by the long fermentation with round, sweet notes.

A Bit of Whole Grain

Whole grains have a detrimental effect on a bread’s structure because bran particles interfere with bonding of gluten strands. That’s why traditional no-knead bread is made with all white flour: without kneading, its structure isn’t strong enough to stand up to a little interference. However, the improved structure in our folded version makes it possible to incorporate some whole grain flour, which further enhances the bread’s flavour. We’ve opted for a relatively small amount – enough to be noticeably tastier but not enough to cause the loaf to be flatter or to have a dense crumb.